Way back when we first got married, my husband thought we might have a big family with a lot of kids.  He was from a family of 6 siblings, so that’s what he was accustomed to.  I am an only child so I wasn’t sure about having so many.

I needn’t have worried.

At some point later I tried fertility drugs.  Clomid and another drug.  One or both drugs made me very angry/depressed/bitchy (one dwarf I left off the image)  Little did I know that these meds were a waste of time.

Eventually,  I did get pregnant and our wonderful son, Michael was born.  It wasn’t until he was seven that I was finally, actually diagnosed with Cushing’s.

When I had my early Cushing’s symptoms, I thought I was pregnant again but it was not to be.

I’ll never forget the fall when he was in second grade.  He was leaving for school and I said goodbye to him.  I knew I was going into NIH that day for at least 6 weeks and my future was very iffy.  The night before, I had signed my will – just in case.  He just turned and headed off with his friends…and I felt a little betrayed.

Michael wrote this paper on Cushing’s when he was in the 7th grade. From the quality of the pages, he typed this on typing paper – no computers yet! 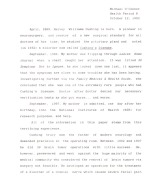 When Michael started having headache issues in middle school, I had him tested for Cushing’s.  I had no idea yet if it could be familial but I wasn’t taking any chances.  It turned out that my father had also had some unnamed endocrine issues.  Hmmm…

I survived my time and surgery at NIH and Michael grew up to be a wonderful young man, if an only child.  🙂

After I survived kidney cancer (Day Twelve, Cushing’s Awareness Challenge 2015) Michael and I went zip-lining – a goal of mine after surviving that surgery.  This photo was taken in a treetop restaurant in Belize.

For the mathematically inclined, this is his blog.  Xor’s Hammer.  I understand none of it.  He also has a page of Math and Music, which I also don’t understand.

Michael explains How do we know the quintic is unsolvable?

And, from his wedding: